No Need for Sprinkler Repair in Kemp, Texas

There are about 1,100 people in Kemp, Texas and none of them need sprinkler repair today.   Why? Because they have NO water.

When you know that Waco owns the lake, it’s pretty easy to be smug–even during this drought.   But you are vulnerable even if you live right next to the lake.

When you turn on your sprinkler system or take a drink from your tap, you’re the beneficiary of at least two components that most of us take for granted, pipes and electricity.

Electricity runs the pumps that bring the water to you.   If the electrical grid fails, it won’t take long before you are out of water.

And, the more pipe there is between you and the water treatment plant, the more possible a pipe break can interrupt you flow. 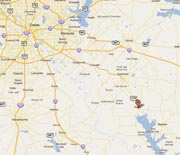 That’s what happened in Kemp, a suburb of Dallas.   Because of dryness, the ground shifted and broke a city main.   Over 2 million gallons later, both water towers were completely empty.

The troubling thing about all of this is it’s not that hard to design and install a rainwater harvesting system.   That would at least bridge a gap until the water supply could get back on line.

We’d love to talk to you about installing an efficient rainwater harvesting system.